Tens of thousands of raucous England fans descended Sunday on Wembley Stadium and central London, singing songs, drinking beer and savouring the occasion, as the football-mad country reached fever pitch ahead of its first major tournament final in over half a century.

Supporters — many draped in red and white English flags — packed to a virtual standstill the famous approach to the northwest London stadium, Wembley Way, downing pints of beer and chanting an array of England anthems long before a ball was to be kicked.

However, as the historic 8pm (1900 GMT) game against Italy approached, the atmosphere turned more febrile, with fans throwing projectiles — including rucksacks, flares, cans and traffic cones — through the air and chanting aggressively at rival supporters.

Footage posted on social media showed a group of supporters storm their way through an outer perimeter fence in a bid to enter the stadium. Wembley authorities said “safety measures were quickly activated” and that no people without tickets got inside the ground.

London’s Metropolitan Police and Mayor Sadiq Khan were forced to take to Twitter to urge fans not to travel to Wembley without match tickets, with the force noting officers were “on hand engaging with crowds and to keep people safe”.

Meanwhile drunken supporters thronged other parts of the British capital, gathering en masse in Leicester Square and at several major railway stations, to revel in one of Britain’s biggest sporting occasions in decades.

But there were chaotic scenes there too, with police reporting “multiple cases” of flares being set off inside London stations and people “jumping off street lamps and hoardings”, risking injury.

“We’re working with train operators to ensure the continuation of services & to ensure everyone can travel safely,” British Transport Police — which patrols the country’s rail network — said, adding: “these incidents are offences & will be investigated”.

Around 1,500 people who won tickets via a ballot began to gather to watch the game on a big screen in Trafalgar Square, where scenes of utter jubilation unfolded after England’s semi-final win Wednesday against Denmark.

The team — nicknamed the Three Lions — have not won a major competition since the 1966 World Cup, and ending the 55-year wait would represent a cathartic moment for the nation.

“Obviously they’ve been a bit unfortunate in the last 50-odd years, so I feel like this is their time to shine,” said Luke Benton.

“I don’t think there’s a better time as well,” added pal Cameron Morgan, as the pair took in the carnival-like scenes in central London.

In a sign of the enormity of the occasion for expectant England fans, many began converging on fan zones and pubs, bars, restaurants and clubs in towns and cities across the country early Sunday morning.

Pictures posted on social media showed long lines of people queuing to get into pubs from south London to Northern England.

Wembley Way was clogged by early afternoon, with high-spirited supporters dancing in the streets, climbing up poles and setting off fireworks.

“I want my son to experience the atmosphere… it was not something I wanted to miss,” he told AFP, confiding his son would be missing school Monday.

“It would mean everything to me, it’s what you dream of,” he added of an England victory. “This is the biggest day I will ever have in football.”

Eugenio Copelli, 63, a railway worker from north London, was one of the outnumbered Italian fans to make the pilgrimage to Wembley.

“I’m not nervous today because I do believe we are going to win it. It is going back to Rome,” he told AFP.

Copelli had not bagged a ticket and would instead be watching with friends on a big screen elsewhere.

“We will be drowning our sorrows in coffee or drinking champagne,” he added.

An England victory would be particularly special for Wembley-raised George Gristwood, who celebrates his 91st birthday Monday and remembers the team’s only other final appearance in 1966.

“I’ve been to more England international matches than any England supporter. I’ve never missed a match,” he said.

“The FA (English football’s governing body) says they don’t know anyone older than me that still goes (to games),” Gristwood added, noting he had visited at least 18 countries — spanning most of Europe — following the team. 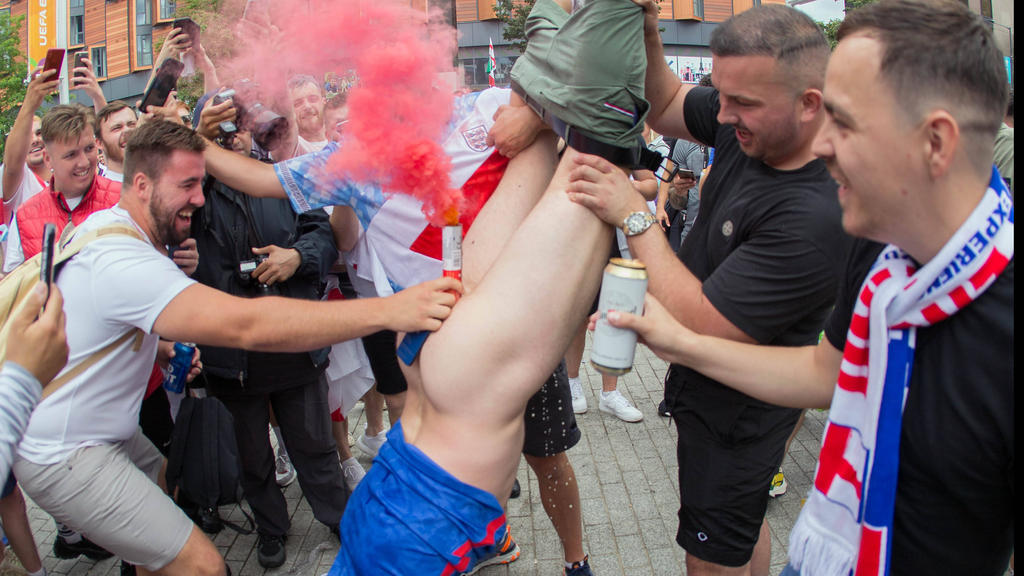