Brains behind the brawn: Germany’s Goretzka hopes to make impact against England

Having used last year’s Covid-19 lockdown to pack muscle on to his frame, Leon Goretzka is set to bulk up Germany’s midfield against England in Tuesday’s blockbuster last-16 clash at Euro 2020.

Germany coach Joachim Loew is under pressure to shake things up in the middle of the park for the knockout stage after neither Toni Kroos nor Ilkay Gundogan impressed in Wednesday’s nail-biting 2-2 draw with Hungary.

Bayern Munich star Goretzka has been limited to cameo roles at this European Championship after recovering from a torn thigh in May, yet he has still made an impact.

He came within a whisker of scoring in the 4-2 drubbing of Portugal as a second-half substitute, then equalised with a thunderbolt strike against Hungary.

“We have no doubts now and are full of confidence,” Goretzka told German television after the final whistle in a warning to England.

Loew was certainly impressed with his “great” performance against Hungary. “He brought in a lot of pace and made deep runs”, the coach said.

After Bundesliga matches were halted in March 2020, as Germany went into lockdown due to Covid-19, Goretzka returned from the two-and-a-half-month break noticeably much more muscular.

He says bulking up paid dividends.

“I can safely say that since I have had these muscles, I go into the games with a different feeling,” he told the Deutsche Bahn magazine.

“It literally made me stronger, you could call it a protective coat.”

Off the field, the 26-year-old has shown the same heart he puts into tackles by throwing himself behind good causes.

Last year, Goretzka and Bayern team-mate Joshua Kimmich donated a total of one million euros ($1.2 million) to found the “WeKickCorona” campaign and help charities during the pandemic.

After scoring Germany’s equaliser last Wednesday, Goretzka made a heart shape with his hands during his goal celebration in response to taunts from Hungary fans.

The game was overshadowed beforehand after UEFA refused to allow Munich to light up the Allianz Arena in the rainbow colours in what would have been a show of solidarity towards Hungary’s LGBTQ community.

“Spread love, Wembley calling!” Goretzka later wrote on Twitter with a rainbow emoji alongside a picture of him making the heart gesture.

Before the European Championship started, he made his politics clear.

“Black, red and gold are the colours of our democracy — not of the far right.”

There are plenty of brains behind Goretzka’s brawn.

Born in February 1995, he turned pro at 18 with home-town club VfL Bochum and earned high marks for his ‘abitur’ – Germany’s University entrance exams.

In 2013, he moved to Schalke 04 and made Germany’s provisional squad for the 2014 World Cup, but was injured in a warm-up game and missed being part of the side that won the trophy.

Two years later, Goretzka captained Germany at the Rio de Janeiro Olympics, but was injured in the first game as the team eventually won the silver medal.

In 2018, he joined Bayern and played a key role in them winning the 2019/20 treble of Champions League, Bundesliga and German Cup.

While most team-mates drive to training, Goretzka borrows his girlfriend’s bicycle.

Last November, when he met Holocaust survivor Margot Friedlaender, he admitted being more nervous of hearing the experiences of the then 99-year-old than in any match.

“We must be the ones who make sure that something like that never happens again,” he said after hearing her story of survival at the hands of the Nazi regime.

Goretzka says the Germany team “wants to counter racism and homophobia with diversity”.

Manuel Neuer has worn a rainbow-coloured captain’s armband at Euro 2020.

When UEFA dropped an investigation into it, Goretzka said it would have been “absurd” if Germany’s skipper had been punished.

“I am happy about every sign that’s made which supports diverse ideas,” he said.

Brains behind the brawn: Germany’s Goretzka hopes to make impact against England 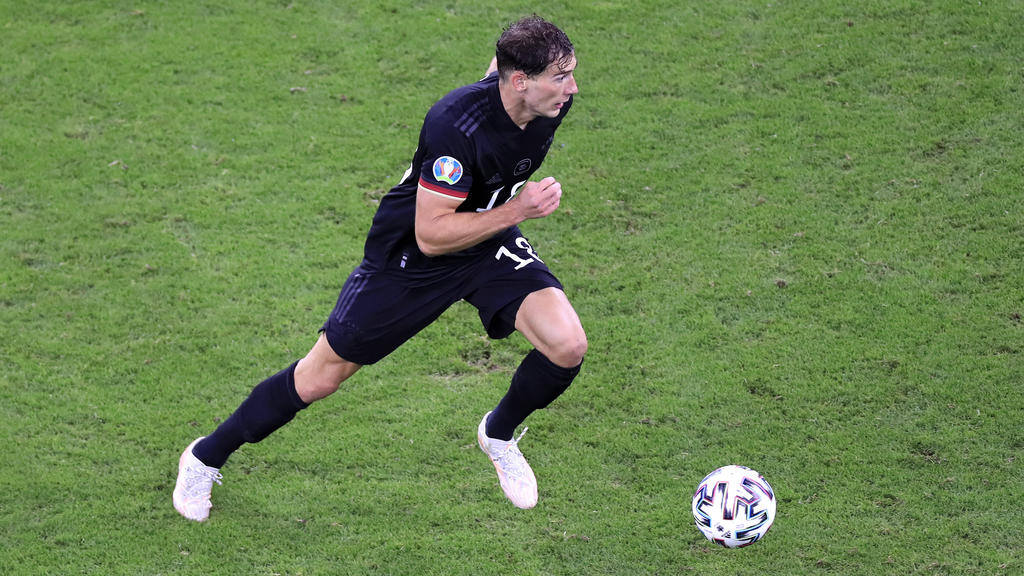