Spain face fight to reach last 16 after draw with Poland

Gerard Moreno missed a penalty and Alvaro Morata squandered the rebound as Spain’s scoring woes struck again on Saturday, a 1-1 draw with Poland leaving them facing a fight to reach the last 16 of Euro 2020.

Morata poked in from close range to put Spain in front but Robert Lewandowski’s excellent header, his 60th goal of the season, pulled Poland level before Moreno’s penalty came back off the post.

The rebound came quickly to Morata but with Wojciech Szczesny committed down to his right, the goal was open for the striker to score his second.

Instead, the ball flew wide and Spain were made to settle for another disappointing draw in Group E that means they might have to beat Slovakia on Wednesday to avoid an embarrassing early exit.

The whistles that accompanied Morata in the opening stalemate with Sweden last week were saved for the whole Spanish team at the final whistle.

Poland, meanwhile, formed a huddle on the pitch before going to over to salute their supporters in the stadium, with the deadly Lewandowski coming up trumps again to keep his team’s hopes of progress alive.

Luis Enrique had launched a passionate and prepared defence of Morata on Friday as he said the team would be “Morata and 10 others”.

But he also replaced Ferran Torres in the starting line-up with Moreno, the Villarreal striker whose 23 goals was second only to Lionel Messi last season in La Liga and who many believed should have been replacing Morata.

Instead, they both played and both were culpable in the game’s decisive moment, even if Moreno had otherwise been bright, his shot teeing up Morata’s opener.

Morata almost gave away an early penalty with an overly-zealous challenge in the box, while Mateusz Klich rippled the top of the net with an effort from distance soon after.

Spain were the better side in possession, with Morata attempting a delicate chip when power might have been better, but Poland were dangerous on the break, Lewandowski tearing away after a poor pass by Rodri only to be marshalled out by Jordi Alba.

Morata’s best moment came in the 25th minute and it could hardly have been easier, even if a little shuffle put him in the right position to poke in Moreno’s shot from the right.

The offside flag went up and Spain’s players appeared to expect the cancellation but instead the goal stood, prompting Alba to fling his arms around Morata, who then dashed over to his coach, a show of thanks for the faith placed in him.

Poland came again though and twice went close before half-time, Karol Swiderski hitting the post with a curling shot that came back for Lewandowski, but he smashed at Unai Simon, who saved.

Lewandowski made no mistake nine minutes after half-time, peeling to the back post, nudging Aymeric Laporte to make the space and glancing a deft header into the corner.

Spain should have restored their lead after being gifted a dubious penalty for Klich leaving a late foot on Moreno.

Moreno stepped up but drove his penalty against the post and with the goalkeeper committed, Morata could have scored too but he scuffed the rebound wide.

Moreno was taken off not long after while Torres, on as a substitute, headed wide when free in the area. Morata could not sort his feet out on one chance, before Szczesny flapped at a corner and then saved Rodri’s drive.

The openings kept coming for Morata as Torres chested down to him but Szczesny smothered the finish and the collision caused Spain’s striker to hobble off with four minutes left.

He was applauded off this time but the whistles for the team came shortly after.

Spain face fight to reach last 16 after draw with Poland 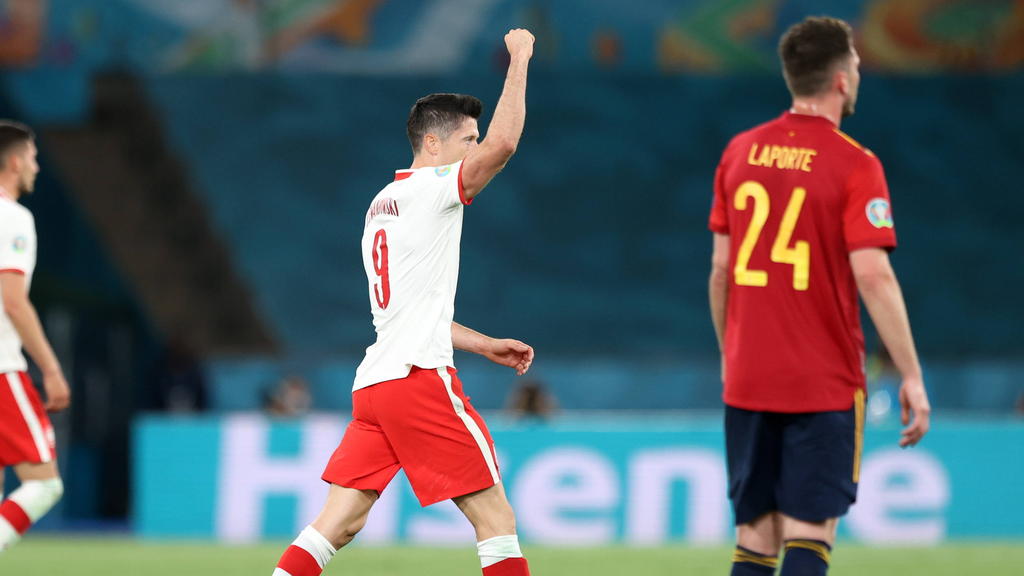