England missed a chance to book their place in the last 16 at Euro 2020 as Scotland kept their own hopes alive with a well deserved 0-0 draw on Friday.

Gareth Southgate’s side would have been guaranteed to advance from Group D with a win over their old rivals at Wembley.

But lethargic England managed just one shot on target and Scotland’s combative display could easily have earned all three points.

Despite a flop that saw them booed off at full-time, England have four points and will be certain of qualifying if they avoid defeat by the Czech Republic in their last group game on Tuesday.

“It was a frustrating night. We know we can play better. We’ve got to give Scotland credit. They defended valiantly and played well,” Southgate said.

“We didn’t do enough to win the game. We have a young team and some of them won’t have experienced a night under this intensity and pressure.”

Scotland, in their first major tournament since the 1998 World Cup, looked far more composed than in their opening 2-0 loss to the Czech Republic.

They remain in with a chance of going through if they win their final match against Croatia.

Ponderous England’s lack of cutting edge was a major issue for Southgate, who responded to Harry Kane’s second successive lacklustre effort by hauling off his captain after 75 minutes.

There had been questions raised about Kane after he failed to make an impact in England’s 1-0 win against Croatia on Sunday.

Kane admitted he was not undroppable this week and Southgate has a difficult decision to make over the Tottenham striker, who finished as the Premier League’s top scorer this term but has suddenly lost his touch.

With an average age of 25 years and 31 days, England’s starting line-up was their youngest ever in a major tournament match and as one of the few senior players, Kane hardly led by example.

“The whole team can look at ourselves, that starts with me. We’ve got to be better,” Southgate said of Kane.

Meeting in a major tournament for the first time since England’s win at Euro 96, this was a redemptive performance for Scotland, whose fans serenaded their team at full-time.

“We played well. We were unfairly criticised after the game on Monday. I have a good group of players and they showed that tonight,” Scotland boss Steve Clarke said.

“I’m delighted for the players. You wouldn’t have known which team was the favourite, which is a credit to us.”

It was the 115th clash between England and Scotland, an ancient rivalry that dates back to 1872 on the pitch and centuries earlier off it.

The Tartan Army were officially limited to 2,500 supporters inside Wembley, but the coronavirus-restricted 22,500 capacity included hundreds more Scots who secured tickets in other areas of the stadium.

It made for a vibrant atmosphere and John Stones should have raised the roof when the unmarked England defender met Mason Mount’s corner with a close-range header that crashed against the post.

But England were unable to make the most of their early flurry and Scotland’s confidence began to soar as the hosts grew more listless.

Chelsea youngster Billy Gilmour, making his first Scotland start, was dictating the tempo with a vibrant display in midfield.

Tierney’s cross picked out Stephen O’Donnell beyond the far post and his stinging volley forced a fine save from Jordan Pickford, with Che Adams heading wide of the empty net from the rebound.

For the second successive game, England had produced a plodding first-half performance.

Southgate’s men took just three minutes of the second half to finally test David Marshall as the Scotland keeper sprawled to his right to save Mount’s powerful strike.

Kane teed up Reece James, selected instead of Kyle Walker at right-back, but he lashed narrowly over from the edge of the area.

Scotland, competing ferociously and playing with intelligence, remained a major threat and Lyndon Dykes’ hooked shot had to be headed off the line by James. 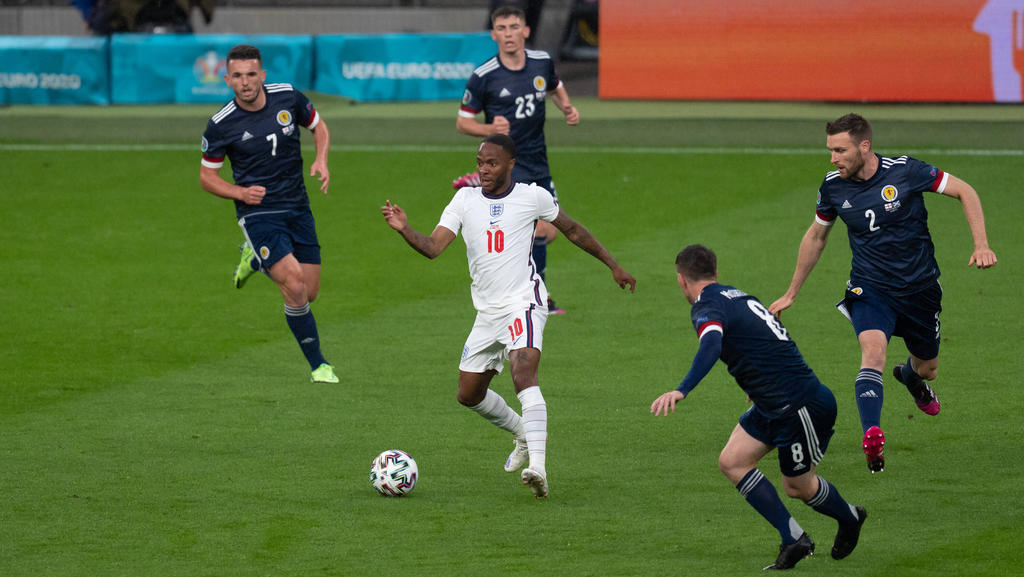