Kevin De Bruyne inspired Belgium to a 2-1 victory over Denmark in Copenhagen on Thursday and secured a place in the Euro 2020 knockout stage as fans and players showed their support for Christian Eriksen.

Yussuf Poulsen gave the hosts a second-minute lead, but De Bruyne came off the bench at half-time to make his first appearance of the tournament after injury and teed up Thorgan Hazard to equalise before scoring the winner with a fine strike.

The match was paused after 10 minutes — a reference to Eriksen’s number 10 — for a minute’s applause for the Denmark midfielder, who suffered a cardiac arrest in his team’s game against Finland last weekend.

The 29-year-old Inter Milan player is recovering in hospital and will have a defibrillator implanted.

A section of fans in the 25,000 crowd held up a banner reading “All of Denmark is with you, Christian” as the match was halted.

If the Danes were traumatised by Eriksen’s collapse or by facing the world’s top-ranked team, they did not show it.

Just after a minute, Pierre-Emile Hojbjerg picked up a misplaced pass by Jason Denayer and found Poulsen who took the ball inside the box and fired across Thibaut Courtois into the bottom corner.

At one minute and 39 seconds, it was the second fastest goal in European Championship history, trailing only Dmitri Kirichenko’s goal after 67 seconds as Russia beat eventual champions Greece in 2004.

Belgium started with De Bruyne, Eden Hazard and Axel Witsel on the bench, but Roberto Martinez sent them all into action after the break and their presence made all the difference.

Eriksen’s Inter Milan teammate Romelu Lukaku sprinted into the box on 55 minutes and found De Bruyne who set up Thorgan Hazard to equalise with a brilliant pass through the stunned Danish defence.

Lukaku, who scored twice as Belgium swept Russia aside 3-0 in the Group B opener, was also at the origin of Belgium’s second goal.

He started a series of one-touch passes involving the Hazard brothers that finally found De Bruyne who fired from outside the box with his left foot.

His low shot beat a diving Kasper Schmeichel at his near post, with De Bruyne immediately refusing any celebration out of respect to Eriksen.

It was a game of two halves with the surprisingly dominant Danes pushing early on to make amends for a disappointing 1-0 loss to Finland in the opener marred by Eriksen’s collapse.

Courtois had to stop Joakim Maehle’s shot after a superb mazy run in the box and then Daniel Wass’s header, while Martin Braithwaite headed wide early into the game.

Belgium barely crossed the halfway line and stayed uncharacteristically subdued as the Danish defence had little problem coping with their attack in the first half.

At the other end, Eriksen’s replacement Mikkel Damsgaard, the 20-year-old Sampdoria striker, was a frequent threat to Courtois.

Belgium levelled possession after the break and came back, largely controlling the game.

But they let Danish striker Martin Braithwaite hit the crossbar with a header four minutes from time while Mathias Jensen fired just over the crossbar in the Danes’ last-gasp effort. 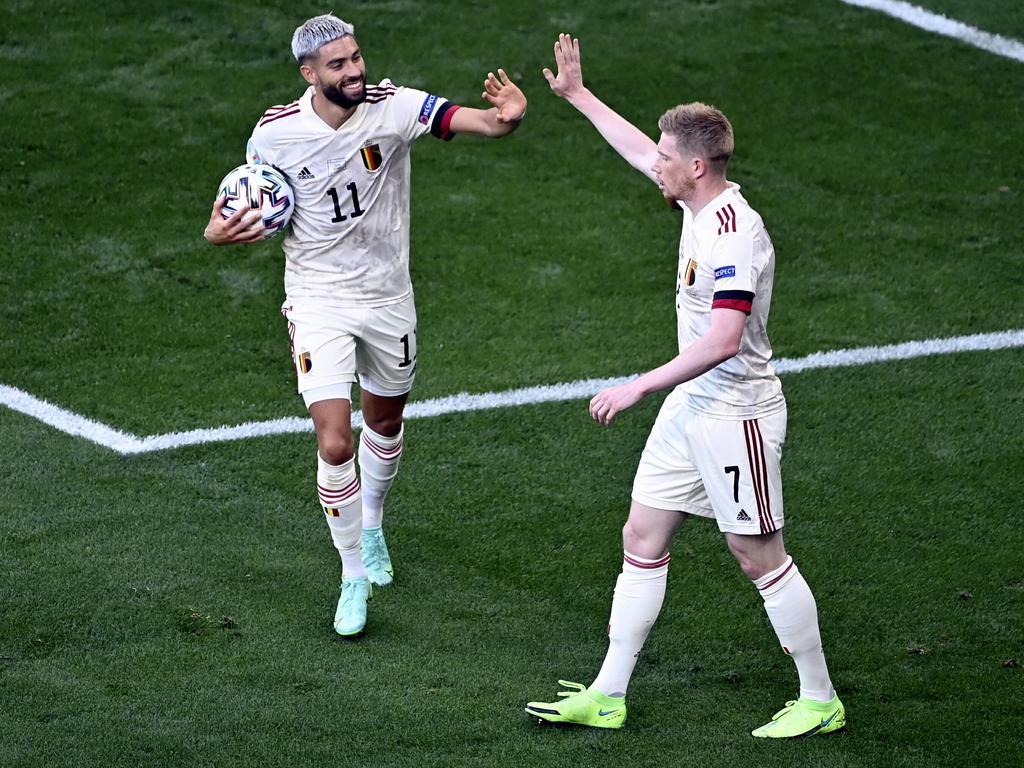